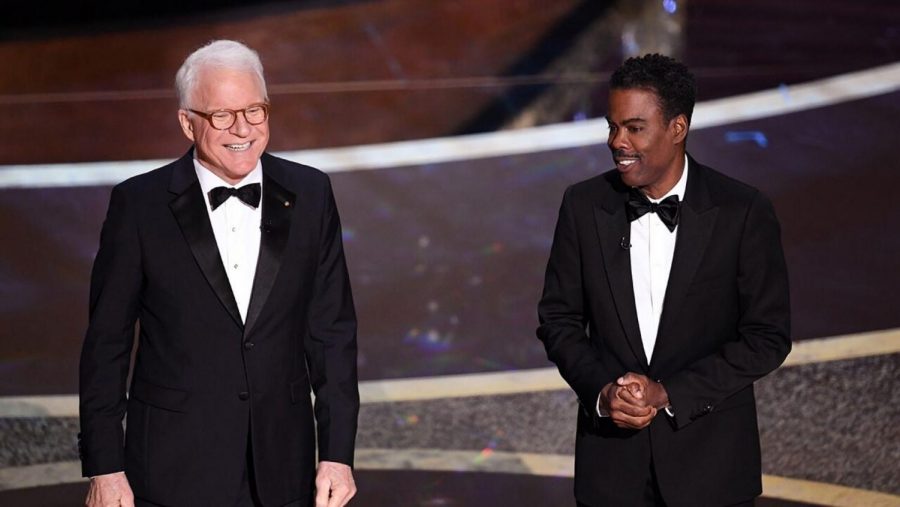 A hilarious Oscars moment was when iconic comedians Chris Rock and Steve Martin walked onstage and opened up the Oscars.The duo brought up serious topics such as women being snubbed for the nominated directors, the lack of diversity in the categories and Kevin Hart’s tweet which was one of the root causes for why the Oscars no longer have hosts. Aside from the serious topics, they also brought great humor to the show! One of their best jokes was when they roasted Jeff Bezos by saying he is the richest man in the world, even after getting a divorce. This witty remark was also followed by Rock saying that Bezos watched “Marriage Story” and thought it was a comedy.

Maya Rudolph and Kristen Wiig are famous actresses known for their incredible sense of comedy. When presenting the award for Best Production Design, the two decided to do a skit of their own in which they acted dramatically and said that they were acting (which, of course, most audience members knew). Shortly after, they burst into song and sang many songs that are related to fashion, like “Vogue” and “Lady In Red.” Who was a bit confused by their performances on stage? Young legend, Billie Eilish was. Eilish’s confused facial expression caused mixed feelings on Twitter. While some believed it was funny and created memes out of it, others felt that it was disrespectful towards Rudolph and Wiig.

One of the best and most surprising moments at the 2020 Oscars was when Eminem unexpectedly performed his hit song, “Lose Yourself” from his hit movie “8 Mile.” Something that was immediately noticed by social media users was the celebrities’ different reactions towards Eminem’s performance. Idina Menzel, Billie Eilish, Finneas O’Connell (Eilish’s older brother) and Martin Scorsese are a few of the many confused celebrities during his performance. However, other celebrities in the audience enjoyed Eminem’s surprise performance! While Eminem sang, Kelly Marie Tran was one of the most excited audience members that sang along with him. Overall, the camera panning off to different celebrities facial expressions during the performance was a highlight of the Oscars.

Another great Oscars moment was Joaquin Phoenix’s heartfelt and emotional win. The actor won his first ever Oscar for his incredible acting in the chilling movie “Joker.” Phoenix’s speech was political. He addressed how humans are disconnected from the natural world and how they plunder it for its resources. The most emotional part of Phoenix’s speech was when he mentioned his late brother and talented actor, River Phoenix. Joaquin shared, “When he was 17, my brother wrote this lyric. He said, ‘Run to the rescue with love and peace will follow.’” River would be incredibly proud of his brother for standing up and fighting for his beliefs.

One of the best Oscars moments was when Bong Joon Ho admitted that he was ready to drink after winning, saying, “I’m ready to drink tonight…I will drink until next morning.” Joon Ho’s quote became so popular that it became a trending hashtag (#ImReadyToDrinkTonight)! Little did he know that his award was the first of many throughout the night as he and his team won three more awards for Best Picture, Original Screenplay and International Feature Film. Hopefully Bong Joon Ho got to have his drink while celebrating his tremendous wins and achievements!

Arguably one of the best moments of the night was “Parasite”’s tremendous win! Winning four Oscars: Best Director, Original Screenplay, Best Picture and International Feature Film. “Parasite” has made history. This was the first international film to ever win Best Picture. Kudos to this incredible film and all the creative minds that helped create this movie!