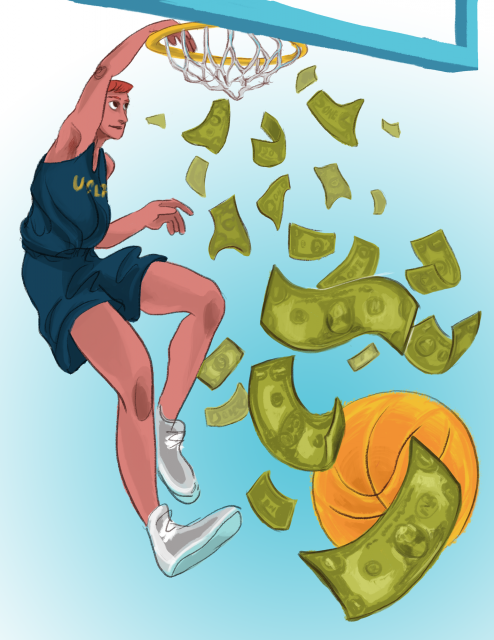 Image via The Daily Bruin

On September 30, 2019 California’s Governor Gavin Newsom signed a bill into act that will possibly be a groundbreaking policy for all college athletes. “The Fair Pay to Play Act” allows athletes to get agents to pursue financial deals such as endorsements and allow them to be paid for the use of their likeness (their picture, name, jersey number). This policy has faced quite a bit of both backlash and praise. While most athletes are very happy about this, there are many people who work for the National College Athletes Association (NCAA) who are incredibly opposed to the legislation. Both sides have legitimate arguments. Let’s look at the facts and what the opinions from those sides are.

The first viewpoint is of most athletes: they want to be compensated fairly for their efforts. They think that the colleges and NCAA are taking advantage of them by not giving them a portion of the money they help bring in for the school, specifically in football and basketball. Football and basketball are the sports that bring in the most money for the program from endorsements and television deals. The athletes want to get a portion of this money they are bringing in for the university. A previous proposed solution to this problem is for each university to get an allotted amount of money to give to their athletes across their sports and to spend it how they wish. This is not actually going to happen with the precedent being set by California, but if that is a compromise, it will be revisited. The news was initially broadcasted by LeBron James, a player who didn’t go to college because the minimum age for the NBA Draft was 18 (it is currently 19). As the news broke, Lebron said on the show “The Shop” on HBO,“I was one of those underprivileged kids. Obviously, I was fortunate enough and talented enough to be able to skip college. But for sure I would have been one of those kids if I would have went off to Ohio State or if I would have went off to any one of these big-time colleges, where pretty much that 23 jersey would have got sold all over the place without my name on the back, but everybody would have known the likeness. My body would have been on the NCAA basketball game 2004 and the Schottenstein Center would have been sold out every single night if I was there.

“And coming from just me and my mom, we didn’t have anything and we wouldn’t have been able to benefit at all from it, and the university would have been able to capitalize on everything that I would have been there for that year or two or whatever. So I understand what those kids are going through. I feel for those kids that have been going through it for so long, so that’s why it’s personal to me.” James talked about the struggle and if a college athlete what their biggest issue is with the NCAA, it is their restrictions when it comes to money. In 2017, Michigan State basketball player Miles Bridges was allegedly taking illegal benefits from the school, which was later to be found out to be a $15 lunch he got for his mom. These restrictions and inequality when it comes to money the university is getting versus what the athletes are getting, is the big issue many people have with the current system.

The other side to this argument is a little bit more complicated. It is sometimes viewed as corrupt and greedy. The NCAA remains determined to not let their athletes get paid any money. They say that they are granting the athletes a free or reduced priced education and the opportunity to achieve new heights in their athletic careers. Supporters of the NCAA says that if they are paying the players, they will not be amateurs anymore and will then be professionals due to being paid by the college. There is also a concern that if colleges begin paying the players, the players will simply go to the schools with the most money, making it difficult for smaller schools to recruit and in turn, the school will not make very much money. They see this as a cycle effect and will render the NCAA useless so the players will simply skip college sports altogether either by playing overseas or somewhere else. The NCAA also has the majority of the athletic directors from schools in favor of the current system.

With all the talk among people being done in the past days, it is a mute point considering it comes down to whether or not the NCAA will allow this to happen. There is time, though, for a long term decision because this law doesn’t come into effect until 2023 so if the state(s) and the NCAA or even the federal government and NCAA can come to an agreement, everyone can do what they really should do when it comes to college sports: enjoy the athletes do what they do best.

UPDATE: Since this article was written Ohio Representative and former Ohio State Wide Receiver Anthony Gonzalez has announced that he plans to propose the Fair Pay to Play Act as well, with his bill allowing athletes to make endorsement money.