DC statehood bill heads to the House for historic vote 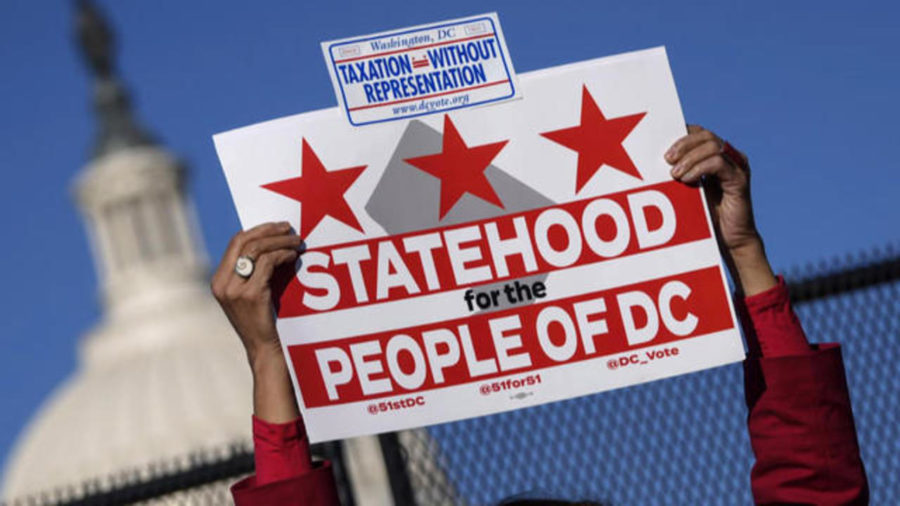 Washington DC may become the 51st state in the union, granting full legal rights to the nearly 700,000 residents of the district. The House Oversight and Reform Committee approved a bill that will go to the House for a full vote the week of April 19, 2021.

H.R. 51 was introduced by DC’s Delegate Eleanor Holmes Norton. The District’s main argument for statehood is their lack of Congressional representation. DC only has a non-voting representative in the House and two unelected non-voting shadow senators. Residents were not able to vote in federal elections until 1961 after being stripped of voting rights in 1801. Residents still pay the most in federal taxes per capita than any other U.S. territory.

The Constitution is the root of DC’s founding. In Article One, Section Eight it says that a “district (not exceeding ten miles square) as may, by cession of particular states, and the acceptance of Congress, become the seat of the government of the United States.” H.R. 51 would make a 10-mile complex of buildings the federal government’s seat and make the surrounding area a state. This means there would be no need to amend the constitution.

This bill is expected to pass in the House, where Democrats have an overwhelming majority. There’s a much closer and newer majority in the Senate, and the filibuster would mean 10 Republicans would have to break party lines and vote in favor of the bill. H.R. will likely fail in the Senate unless the filibuster is repealed, which is not an unpromising stipulation. Senate majority leader Chuck Schumer has set forth new efforts to reform the filibuster on April 15.

In September of 2019, the House held a hearing on DC statehood, confronting the issue for the first time since 1993. There is now vast support for DC statehood, with 86% of voters in DC supporting statehood in 2016. This support swelled after the January insurrection attempt. DC has incredibly limited militaristic autonomy. During the riots in January of 2021, Mayor Muriel Bowser had no ability to call in the National Guard and had to turn to Virginia and Maryland for troops. The lack of preliminary forces have been largely blamed for the violence that ensued across the District, after the deployment request was denied by the Trump administration.

The largest argument against statehood used to be that DC would be unable to provide Congress with sufficient protection if it were to become a state. After January 6, it was proven that not being a state actually left lawmakers in greater danger. DC gaining statehood concerns Republicans, as it would grant the Senate with two more Democratic senators. The right has, however, a limited ability to argue against statehood. GOP Senators have even pointed out that there is no airport (Reagan and Dulles are both technically in Northern Virginia), no car dealership (which is not true) and no landfill in DC.

There were also suggestions to have Maryland absorb DC (since giving the House another Dem wouldn’t be as detrimental), but DC residents want autonomous statehood and Marylanders oppose adding a DC county to the state by 57%. The Residence Act of 1790 receded 31 square miles from Virginia and 69 square miles of territory of Maryland. Virginia immediately began looking to get the territory back, and eventually brought Alexandria back to Virginia in 1846. Today, the DMV has a sense of cultural connection but very independent governments and economies.

The battle for statehood has also been considered a landmark situation for racial justice. Dating back to the 1800s, DC had high rates of registered Black voters. New commissions were then put in place to stop thisBlack voting bloc from the District, and this voter suppression continues today. Statehood would mean that DC is the state with the eleventh largest Black population in the nation. Additionally, DC becoming a state would mean that DC would no longer run the risk of the federal government vetoing local laws under the Home Rule Act. This act has impacted legislation regarding issues such as reproductive rights, in such a largely left-leaning region.

Statehood would also mean it’s time for a new name. The DC City Council voted unanimously in favor of calling DC the “State of Washington, Douglass Commonwealth” in honor of Frederick Douglass and in order to separate from Christopher Columbus. It is quite possible that the DMV could soon mean the Douglas Commonwealth, Maryland and Virginia.

In one of the most political places in the nation, having the right to representation is a big issue.