From the board: NRA makes poor suggestion to put guns in classrooms 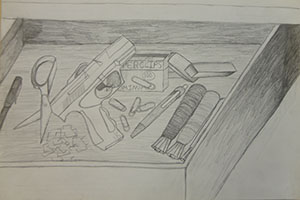 In the wake of mass shootings, most recently at Sandy Hook Elementary in Newtown, Connecticut, the issues of gun control and safety are again under scrutiny by the entire nation.

At Sandy Hook, 27 people, including 20 elementary aged children, lost their lives at the hands of a merciless and dangerously armed killer.

Immediately after the shooting occurred, the nation banded together to mourn the tragedy but also begin nationwide movement to prevent any incidents of this violent nature permanently.

In early April, the National Rifle Association formally proposed a plan that would allow trained teachers to possess guns in their classrooms as an added safety measure.

As high school students who would be affected by such a proposal if enacted, we express great caution in allowing such weapons in the hands of even trustworthy and sound teachers.

It is understood that teachers and faculty do have the responsibility to make sure their students are safe, but studies show that the possession of a gun during any given conflict increases the probability of a more severe outcome.

There is too much uncertainty with allowing teachers to have arms in classrooms that it could ultimately endanger students rather than protect them.

For example, how would such weapons be stored in classrooms? Would the teacher or faculty member have the gun around his or her waist at all times or would it be stored in a locked desk drawer?

There are too many possible dangerous scenarios, like if a disgruntled student was to come across the storage place of the weapon or someone steals the gun.

Additionally to be an effective measure, the gun would have to be loaded and easily accessible.

It is impossible to not consider all the frightful conflicts that could arise if this classroom weapon got into the wrong hands.

The fact is that guns are dangerous no matter how they are treated.

Police officers train for years to properly fire guns and yet even they sometimes miss their targets.

How could one expect that teachers could train on shooting ranges and then be prepared to combat an armed conflict without causing harm to other students?

Knowing that these guns are within a classroom would frighten those who enter, rather than creating an atmosphere of a safe and secure environment.

There is no question that Newtown should be the absolute final straw and there must be a call for change in school security, but the NRA’s recommendation does not comfort us.

Security can be achieved in other ways besides arming teachers. Putting security officials who have been trained and are experts at firing weapons and ensuring safety would be the optimal solution.

Fighting fire with fire is a futile attempt at extinguishment.

Fighting guns with guns is no different.