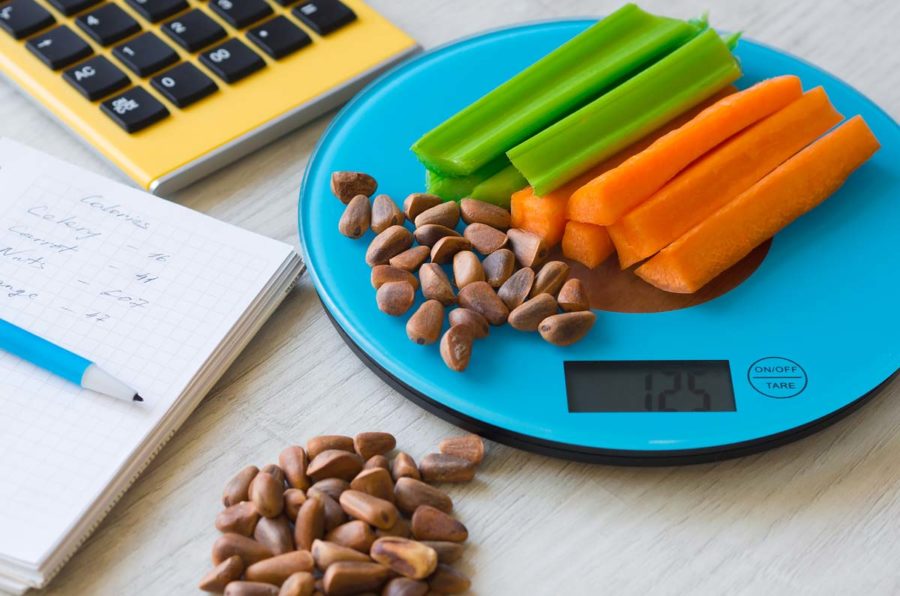 All students in the state of Virginia are required to “receive health and physical education” from kindergarten through grade ten. At South Lakes, part of the curriculum requires sophomores to keep a detailed log of the food they eat, utilize nutrition trackers and record their total caloric intake. These requirements come from a health class assignment first introduced to South Lakes in 2018. The calorie counting aspect of the “10th Grade Health & PE Fitness Plan – Nutrition Log” assignment leaves many students feeling insecure and lacking in genuine understanding of healthy eating.

The Health and Physical Education Department Chair, Ms. Angelica Ortiz, explained, “The nutrition log is one piece of a larger project called the Wellness Portfolio which focuses on planning for personal wellness.” The assignment instructs students to “track your caloric intake for 7 consecutive days.” Ms. Ortiz said that the goal of the project is to “provide students an opportunity to reflect on their personal health and wellness in specific areas including sleep, physical activity and nutrition, learn about recommendations, set personal goals and develop action plans to maintain or improve their personal wellness in a variety of areas.”

South Lakes is not the only school in Fairfax County that assigns such a project. A current senior at Robinson Secondary School shared that they do a similar, though not identical, assignment. Students at Robinson are also asked to record all that they eat in a week, though they are not asked to track their caloric intake. The assignment is not one of the public suggested lessons from the Virginia Department of Education. Ms. Ortiz shared, “The assignment is aligned to the Virginia Standards of Learning for Health Education: ‘a)  Create or modify a personal wellness plan (i.e., goals and action steps based on current guidelines) for healthy eating to meet current and future needs’  It was designed by Fairfax County Public Schools. I don’t know if teachers have modified [it].”

Fairfax County Public Schools (FCPS) lists an interest in caloric intake as a warning sign that a child may be developing an eating disorder. FCPS said students may “[talk] a lot about, or [focus] often, on weight, food, calories, fat grams, and dieting.” In 2013, Virginia became the first state to pass eating disorder education legislation, when the commonwealth signed a bill into effect, requiring parents with children in grades 5-12 to annually receive information from their school systems about eating disorders.

A calorie is “the amount of energy in an item of food or drink,” as defined by the United Kingdom’s National Health Service. Dr. Fatima Cody Stanford, an obesity medicine physician at Massachusetts General Hospital and professor of medicine and pediatrics, stated in Harvard Medical School’s publication, “This idea of ‘a calorie in and a calorie out’ when it comes to weight loss is not only antiquated, it’s just wrong.”

This assignment can have dangerous consequences, as outlined by numerous students, including Sophomore A, who requested to remain anonymous due to the sensitive nature of their story, “I have struggled with body image and know it is something that can be very harmful to a growing teen’s body and mindset. I started eating a bit less in between meals, eating less during meals in general, and trying to be ‘healthier’ when there wasn’t anything wrong with my meals in the first place. I’m sure there are multiple other students who have seen this assignment while struggling with body image and had trouble comprehending how this was a school assignment.” Approximately 25% of 12,000 15 to 17-year-olds surveyed misperceived their weight, with 11.6% inaccurately believing themselves to be overweight, according to the Journal of School Nursing.

“As a dietitian, I don’t recommend for any adolescents to keep track of daily calories…It could become an obsessive habit and turn into an unhealthy focus on food and amounts,” wrote registered Dietitian Nutritionist Katherine Harmer. There is also a large margin of error — at an average of 20% — on nutrition labels in the United States.

Roughly 11% of high school students in the United States have formally diagnosed eating disorders. BIPOC are far less likely than white people to be asked about eating disorders, be identified, or receive treatment. Hispanic/Latina women are in a demographic group severely lacking research and support materials, though there are studies that suggest they experience eating disorders at rates similar to or greater than white women. At a school that is 55.21% non-white (and predominantly Latino outside of white), it is arguably dangerous to introduce potentially harmful habits that may not be caught by professionals. The pandemic has also exacerbated these concerns, as research has found that the pandemic has worsened symptoms of numerous eating disorders. 95% of people with eating disorders are between the ages of 12 and 25. In a 2019 study done by Fairfax County on people in the community, “45% scored ‘at risk’ and 27% ‘may be at risk’” for disordered eating.  Eating disorders are also the second deadliest psychiatric diagnosis in the United States, second only to opioid use disorder.

When asked what is done to handle this subject sensitively and avoid triggering eating disorders, Ms. Ortiz responded, “The Wellness Portfolio is student directed learning with the teacher as a facilitator and support in the process…If a student expresses concern with the nutrition aspect, they will be exempt from this portion of the project. I don’t have an exact number, but I would estimate less than 10 students a year [request this].” Sophomore B (who also requested anonymity for similar reasons) shared, “As someone who knows of family members who have suffered from eating disorders it is triggering and disrespectful that teenage students have to count their calories for an assignment in order to receive a good grade…Vulnerable students [are] being asked to count their calories…Personally I didn’t answer the calorie questions, I just wrote that I didn’t feel comfortable answering them.” After the assignment was graded, the student said, “I received a 19/20 on the assignment so I’m not sure if I was penalized for that or something else.”

Nancy Darmory, a certified pediatric nurse practitioner in Northern Virginia, shared that she has faced a number of issues with school health assignments with patients, “I can say the health nutrition curriculum can be particularly damaging, let alone upsetting, to so many teens. [Especially] those who battle anorexia and overweight concerns [and] food insecurity issues. I have needed to address this for patients formally with schools over my 21 years in private practice in Reston.”

Students also track their sleep and exercise habits. In some previous years, these tasks were not assigned to be turned in during the same week as the nutrition log. Sophomore A shared, “The calorie counting activity made me feel a little self conscious, and personally, the project didn’t make much sense. The teachers had us log sleep, nutrition, and exercise just to make a goal and improve upon something. There was no learning aspect, and it made students like myself think that they were doing something wrong. I know multiple friends and student peers who have different lifestyles, dietary restrictions and other circumstances where they would be eating more/less than the ‘healthy caloric amount for a teenager.’”

A senior at South Lakes who opted to remain anonymous due to the personal nature of her recounting, shared, “[The assignment] made me feel like crap because the way the media talks about calorie counting, they make it seem like too many are terrible, but they don’t take exercise into account… It was around the time I was also on track and I started exercising way more and eating way less because I thought I needed to burn way more calories, because I had ‘too many,’ but what they didn’t realize is that I am super active so a lot of the calories I ate, I also burned. I don’t think they should [do the project] because the only thing it provided was more stress, like, no one learned anything from that,” she added, “and I’m pretty sure half the class didn’t do it anyway.”

Sophomore C also discussed the lack of learning, “I feel as though the calorie counting activity was a bit baseless, due to its inability to teach the inner workings of a balanced diet and the step by step process of becoming a healthy individual. The problem with the project was the tendency of requiring the center of the workload to revolve around filling blanks, and taking statistics, without any intention of changing those statistics, in order to make them more fitting for the primary goal of the project…I did not complete the full project with truthful responses, due to the time it takes to fully record your diet, plus the meticulousness needed for tracking. Although some of my responses were somewhat truthful, I feel as though many of the students who were given the project met the same conclusion that I did.” Students feeling as though they gain nothing from recording calories leads to a lack of interest in the assignment and a loss of motivation and learning.

There are those who find calorie tracking not entirely detrimental. Childhood obesity rates have dropped in recent years. According to the U.S. Centers For Disease Control, the prevalence rate is “21.2% among 12- to 19-year-olds.” A U.S. law requiring calories to be listed on menus is predicted to prevent roughly 28,000 premature deaths and 136,000 new cases of heart disease, also saving the nation $10 billion in healthcare costs. Nuri Songer-Johnson, a sophomore who completed the assignment, shared, “The calorie counting activity was just fine! No, I don’t feel it led to any dangerous behaviors…For the most part, there was not much that I had to change. I think it’s totally ok if the school assigns this project but I do feel it’s treading on dangerous territory since some people feel uncomfortable talking about this subject.”

Students at schools around the U.S. have been pushing back against such assignments. A student in Wisconsin created a petition, demanding that the school end the practice of assigning students a calorie counting project. She said that she was already suffering from anxiety and depression, and that the introduction of the calorie counting left her “fixated,” leading to disordered eating habits.

South Lakes students aren’t asking the school to throw away the assignment all together. Sophomore C said, “I believe that the school should be allowed to assign the project with a multitude of tweaks. I think that the project should [have] more meaning. [They should] change progression [of] the project, instead of writing down the statistical information with no meaning behind the mandate. I also think that the project should be cut [down], and require less planning/scheduling.” Sophomore A said that they felt there wasn’t enough educational material surrounding the project, “I think the idea of the assignment would be fine, but there needs to be a legitimate educational aspect of the project…If the teachers were to teach students about nutrition and go into detail about the harms of lack of sleep. Even if the teachers were to help bring awareness to eating disorders, or promote body positivity would be a better alternative.”

Asking students to track calories can lead to dangerous habits in students at an age and era that leaves them highly susceptible. Students ask that the assignment allow them to focus on health, not numbers.