What a World Series win would mean to DC 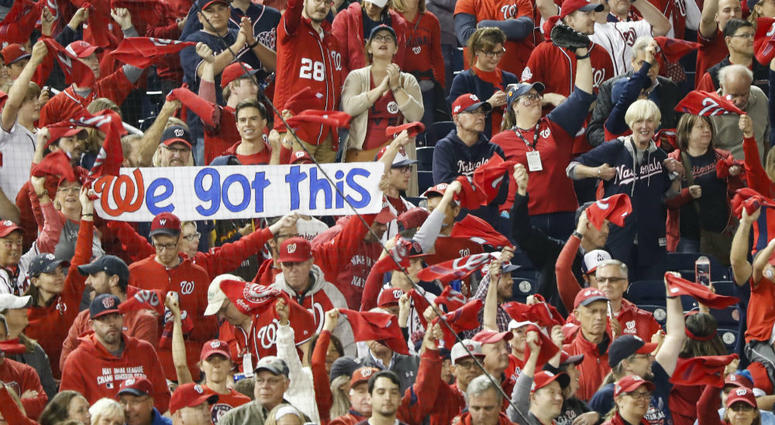 The District of Columbia (DC) is the nation’s capital of the most powerful country in the world. The hub of the US government is stationed in the city and it is home to many national monuments. The sports teams in the city, though, have much to be accomplished. The teams have combined to win two major sports championships (MLB, NHL, NFL, NBA, WNBA) in the last decade. Both of which have come in the last two years with the Capitals breaking through and winning the 2018 Stanley Cup and the Mystics winning the 2019 WNBA title. This to many fans, though, doesn’t break the “DC curse.”

The “DC curse”, like many other “curses” in modern sports has their origin. Take the “Curse of the Billy Goat” for example, when the Chicago Cubs were “cursed” back in 1908 after winning a World Series, to never win another. They ended up breaking the curse in 2016. The DC sports teams are underachieving for fans and even outsiders. The Redskins haven’t been contenders since the 90’s. Die-hard Redskins fans might disagree with that, arguing that they were good with Robert Griffin III, it is a fact that is generally true. The Wizards suffered multiple playoff losses and now are facing a rebuild. The Nationals have had amazing teams in the regular season only to crumble in the playoffs. The Capitals have had amazingly disappointing playoff runs until they won it all in 2018. This makes DC sports fans some of the saddest sports fans in the country, possibly behind only Cleveland(one championship since 1964) and Seattle(19 straight season without being in the playoffs for the Mariners and losing the Supersonics to Oklahoma City and now being without a basketball team).

In the past, Washington has been criticized for not being a good sports town and having low attendance numbers, even though the teams are competitive. These practices are justifiable considering the Nationals are on the bottom half of the league in attendance even though the team has been competitive for the last 7-8 years. The Redskins are among the bottom 5 in attendance this season and fans have been protesting owner Dan Snyder and how he has handled the team since he bought them. Wizards fans had a few good seasons, but it has been tough to be a Wizards fan other than that in the 2000’s. The attendance isn’t the only criticism of DC sports fans. While DC can’t compete with big markets such as Los Angeles, New York, or Boston, the teams in the DC area do actually have decent financial resources. They have a good amount of money to spend on new players and retaining the old ones, and in this time, shelling out millions of dollars to sign high profile players. The common theory among fans is that if a team is competitive, the fans will show up in droves to watch the games.

There are possible reasons for the low numbers attending games. The Redskins stadium is inconvenient  to fans considering FedEx Field in Landover, Maryland, which is around 20 minutes away from DC. Nationals Park was built in Navy Yard, now renamed The Wharf, which was originally not the best neighborhood. There was a shooting in Navy Yard a few years ago, which caused the team to give the area a facelift in the past few years. There is also the fact that a lot of the residents of DC are government workers who aren’t actually Washingtonians. This isn’t quite as much of a problem in a place like New York, where the majority of people who live there are actual residents of the city.

The World Series appearance is just what this city would need to bolster its image in the eye of sports media. The way the fans have shown up for the games and how they have celebrated with the team as if they are the ones playing has really exemplified that DC is a sports city. The energy that has been created with one magical postseason run can do to exercise the demons of one city, and writing a new narrative that is here to stay.