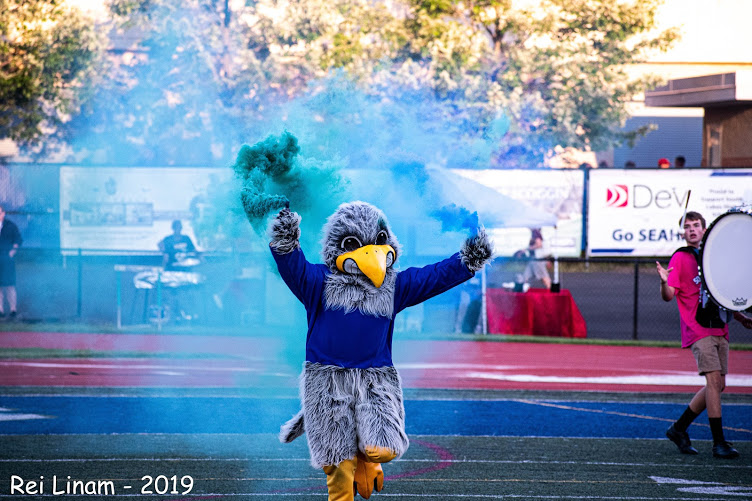 Football is one of the more popular sports at most high schools and with that, there are a wide range of gameday traditions. We got answers that were expected, such as wearing jerseys to school or listening to the same songs before the game, but there were some that players enjoy that we didn’t even think about. For example, multiple players said that taking the field by running through the inflatable seahawk tunnel and green and blue smoke is a tradition they enjoy. The gameday experience is a big part of playing for the football team too. Playing for the community of Reston is something that is very meaningful for a lot of the players. Many players talk about the energy on game days and how the Reston community really embraces them through their accomplishments and even their failures. It really is the sense of community that teams, players, and community members hope to have with their team that is the most meaningful tradition of all.

During basketball season, players from both the boys and girls teams said that the crowd and hype squad add to the experience of being on the team. The way the crowd is loud and how they are so passionate about the team is outstanding. When Joseph Dagbe hit the game-winning shot to win the playoff game for South Lakes, videos from the crowd went viral. These videos show students rushing the court and celebrating with the team. That is the one moment that players point to as one of, if not the best, moments where the student section and team really connected and celebrated together. Basketball players also talk about how the music in the locker rooms really gets them ready to play and win. While this isn’t a game day tradition, players say they especially enjoy playing against Herndon. They say the rivalry between the schools and the familiarity between players makes it a really fun game. The fans being right on the court at Herndon and the energy in the stands is one of their favorite things to be a part of.

While there weren’t too many more responses that we got from spring sports athletes, some said that they really enjoy playing right after SOLs. After being in a classroom for hours, players say they really like getting their energy out and getting to play a game they enjoy. The pregame playlists for the sports are also something that players enjoy. The music isn’t quite what all of them listen to on their own time, but they don’t mind listening to them if it helps them win.

With all pregame traditions, they started as just something they do before games, then it turned into something they can’t play without doing beforehand. With all the different names for the traditions, whether it be superstition or general craziness, if it helps the player perform, who should stop them?