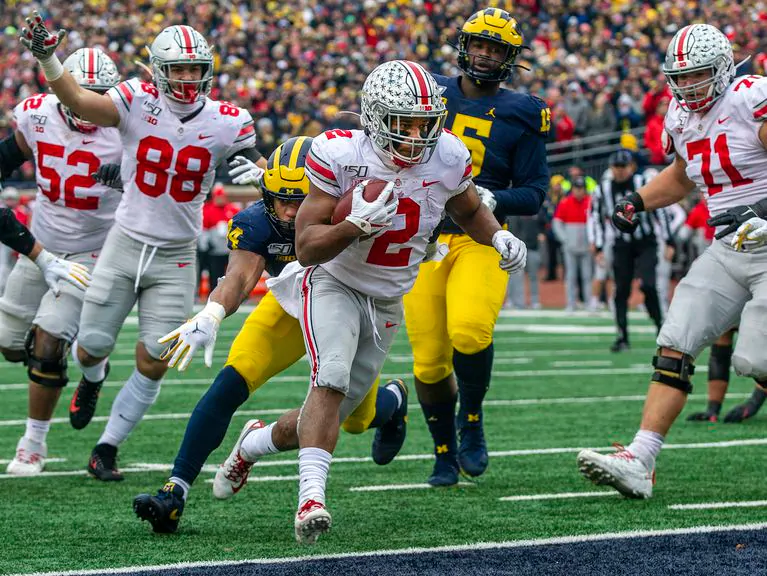 Week 14, better known as “Rivalry Week” in college football is one of the most important weekends of every playoff hopeful college teams season. In the west, teams such as Oregon, and Oregon State battle it out in the “civil war” determine who’s the best in the state. In the east, teams compete in below freezing temperatures for many iconic trophies such as Virginia’s very own Commonwealth cup, or the famous Paul Bunyan’s Axe. Of the biggest rivalries in college football, around 75% take place on week 14 of the season deeming it one of the most exciting weekends of football. With 14 finished this past weekend, I will be breaking down some of the biggest games of the week.

Ohio State proved to the nation why they are the top team in the country with a dominating win over #14 ranked Michigan. While being one of the top rivalries and one of the best games in college football, Ohio State has controlled the rivalry recently, winning the last 8 by a score of 331-216. Coming into the game, Michigan fans remained hopeful that their team would be able to break the streak as many sports writers such as ESPN and Bleacher Report projected Michigan to win the Big Ten conference. Also the game would take place in Michigan’s home stadium, where they are 634-150-21 all time. However, Michigan added a loss to their record as Ohio State’s star running back, J.K Dobbins, ran for over 200 yards with 4 touchdowns, and quarterback Justin Fields aired it out for 4 touchdowns of his own, along with 330 yards. This statement game put other championship hopeful teams on high alert.

The Iron Bowl has always been a back and forth exchange of wins, with Alabama having a slight edge in the rivalry 46-37. With Alabama sitting at #5 in the country, hopes for a playoff spot were legitimate. If Alabama could beat Auburn, the playoffs would almost be a guarantee for their relatively strong season. The biggest story of the game was that Alabama’s star quarterback, Tua Tagovailoa was injured in their previous games and was ruled out for the season. This left sophomore Mac Jones with the start. Although he played well, Jones threw two interceptions that would be returned for touchdowns, one being 100 yards. With these two interceptions, Auburn barely edged out the competition and knocked Alabama out of playoff contention.

Minnesota came into the rivalry with all of the hype they could possibly need. There isn’t a closer rivalry than the Battle for Paul Bunyan’s Axe as the rivals came into the game with a head to head record of 60-60 against one another. Although, Minnesota’s wins came from the 70’s as Wisconsin had won 14 out of the last 15 matchups. This seemed like the year where Minnesota would  start a streak of their own. Coming off an enormous win against #4 Penn State 2 weeks earlier, Minnesota seemed unstoppable, especially in their own stadium. However, the hype was quickly fended off by the Badgers as they walked in and put 38 points on the board during their stay, with Heisman Trophy candidate, Jonathan Taylor, running for 2 touchdowns. The Wisconsin defense shut down the Golden Gophers offense, holding them to 17 points and collecting 5 sacks and an interception. Just as fast as Minnesota climbed up the rankings, they immediately dropped out of the top 25 in the latest rankings. With Minnesota’s new look, one can expect this game to be much closer for years to come.

With one of the longest active rivalry streaks, Virginia Tech came into the rivalry winning 15 straight games against UVA. With the year UVA has in sports this year, however, they were absolutely not counted out from the beginning. The betting spread had been closer than ever during the streak with Tech being a favorite by 1.5 points. The teams traded scores back and forth with both quarterbacks throwing for over 300 yards. The biggest difference was the turnovers however, with Virginia Tech quarterback, Hendon Hooker, throwing two interceptions. In the last minute down by 2, Hooker fumbled the ball in their own endzone, which was recovered by UVA’s Eli Hanback to put the game out of reach. This win clinched the ACC Coastal division for UVA, their first in school history.

With all of the upsets and unexpected results coming out of the weekend, Rivalry week lived up to the hype of one of the most exciting weeks of college football.