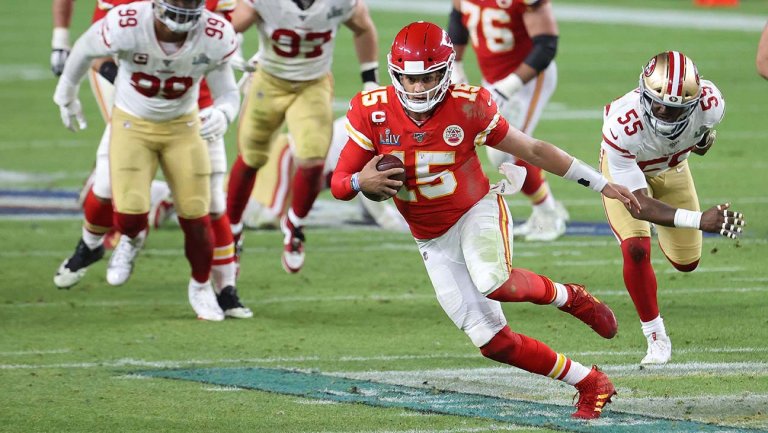 For the first time in 50 years, the Chiefs brought the Lombardi trophy back to Kansas City in a thrilling final game. Kansas City finished the 2019-2020 regular season with a record of 12-4 and looked to pose a postseason run.

In the first half of the Superbowl, the game remained a nail-biter, with 49ers’ QB Jimmy Garoppolo finishing the half on a strong note. With 5:14 left in the second quarter, Jimmy Garoppolo delivered a perfect pass to Fullback Kyle Juszczyk for a 15-yard touchdown. The game was tied 10-10 after the late second-quarter touchdown. The last play of the first half was a large passing play from Garoppolo to Tight Ends George Kittle. Kittle was called for pass interference and negated a big play at the end of the second quarter. 49ers Head Coach Kyle Shanahan disregarded the call as hand-fighting and not enough for the refs to throw the flag. Coming out of the first half, Chiefs quarterback (QB) Patrick Mahomes threw a very rare interception to the 49ers strong coverage Linebacker Fred Warner and resulting in the Niners taking a 10-point lead with 12 minutes left in the fourth. After another Mahomes pick, the Chiefs became aware that it was now or nothing and a comeback had to happen soon. Kansas City, on their next drive, drove down the field and into the endzone in order to make it a 3-point game. The Chiefs stopped the 49ers with a huge sack and they got the ball back with three minutes left. Finally, the Chiefs and QB Mahomes mounted a drive that would begin with a 38-yard throw and catch to WR Sammy Watkins. The drive ended with the chiefs taking a 24-20 lead with 5-yard TD to Damien Williams.

The game ended with Chiefs Head Coach Andy Reid being showered in the traditional Gatorade cooler bath and him being named Super Bowl LIV champion.