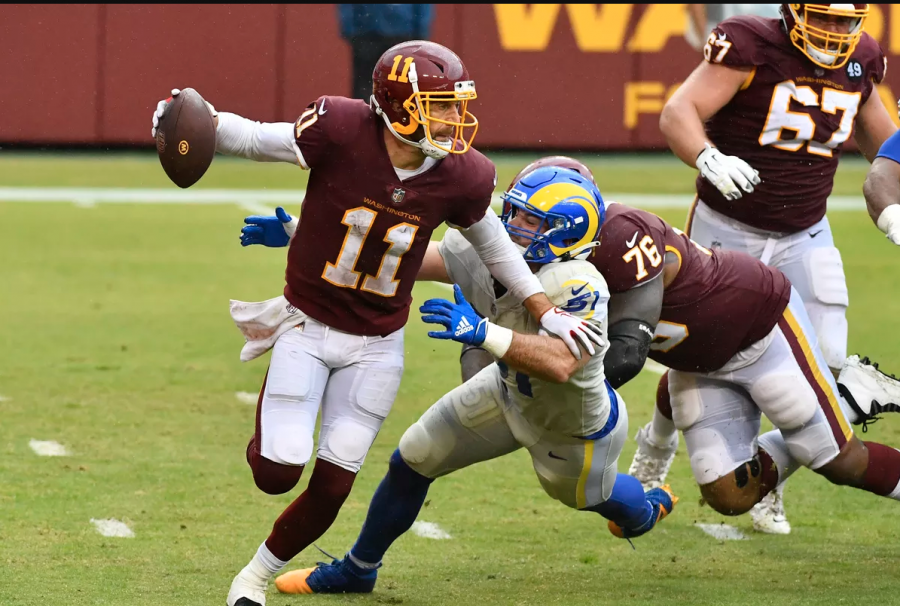 We are now through nine weeks of the 2020 NFL season. The Washington Football team has had one of the most unusual seasons in recent years. Since we are now exactly halfway through the season, let’s take a look at how the season has been going for Washington.

Kyle Allen in his first career start in Week 5 suffered a concussion that would keep him out for the rest of the game. That brought in veteran Alex Smith. Smith is not any ordinary player. In 2018, Alex Smith suffered a serious leg injury that almost caused his leg to be amputated. Smith ended up struggling and Washington fell to the Los Angeles Rams by a score of 30-10.

Allen was able to play the next two games against the New York Giants and Dallas Cowboys, respectively. Washington lost to New York after failing to convert on a two-point conversion that would have given them the lead; Washington fell to the giants 20-19. Next up was the rival the Dallas Cowboys. Washington played a perfect game on offense and defense to give them a dominant 25-3 win.

The two games that followed were a struggle for Washington. In the first half QB, Kyle Allen suffered a gruesome leg injury. This injury was very similar to the one Smith suffered in 2018. Alex Smith was then forced to come back and finish the game. The comeback attempt fell short and Washington fell to the Giants again, this time, by a score of 23-20.

After the game, Washington announced that Kyle Allen will miss the remainder of the season with a dislocated ankle. Since Dwyane Haskins was benched earlier this season, head coach Ron Rivera was not confident in the team’s chances with Haskins at the helm. Alex Smith was then named the starter for the Week 9 game against the Detroit Lions. Washington dug themselves a deep hole they could not climb out of, as another comeback attempt fell short and Washington lost again 30-27.

It has been a wild QB carousel this year going from Haskins, Allen, and Smith, who have all struggled at some point. However, there have been a few bright spots on the team. The Washington secondary is ranked as the number 1 pass defense. They have also had one of the best defensive lines in the league. With rookie pass rusher Chase Young getting double-teamed almost every snap. That leaves wide open holes for the rest of the line to get to the quarterback.

It is not a secret that the strength of the team comes on the defensive side of the ball. There has been one very bright spot on the offense. Second-year wide receiver Terry McLaurin has been the most reliable guys to throw the ball to on any given play. McLaurin has the 4th most receiving yards in the league to go along with 3 touchdowns. Keep in mind since Mclaurin is the top receiver he’s always going to be “shadowed” by the opposing team’s corner. Even with having to play with 3 different QB’s this season, McLaurin has still shown he can be one of the best receivers on not only the team but in the league.

As of right now, Washington holds a record of 2-7 and sits 3rd place in the division. Everyone knew coming into the year it would be another tough year. Believe it or not, Washington still has a chance to win the division with 7 games left to go.

More likely than not Washington will finish a 3rd place team and continue to struggle in some areas of the game. Washington doesn’t have an easy schedule remaining so expect some losses from here on out. Washington has an upcoming game on Thanksgiving and will take on the Dallas Cowboys at 4:30 pm.