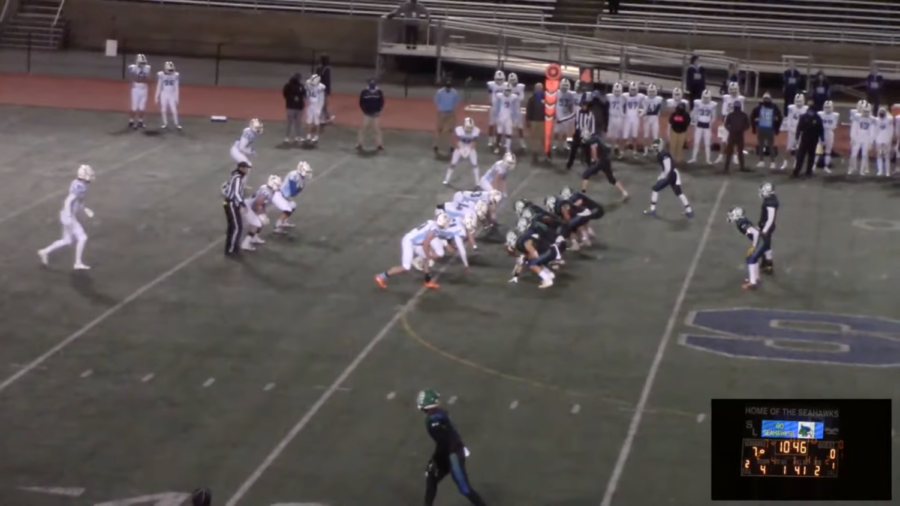 The Seahawks dominated Yorktown with a score of 33-0! After scoring early and often, South Lakes never looked back. Yorktown could not get going on the offensive side of the ball and now sits at a record of 0-2.

Yorktown received the ball to begin the game but threw a pick on the very first play! Then the Seahawks took over and turned the ball over themselves. On the seahawk’s next possession, they got a 13-yard rushing touchdown by Dylan White to take the lead 7-0, to end the quarter.

The second quarter started off with great defense by both teams but South Lakes finally broke through to extend their lead 14-0 on a 31-yard passing touchdown by Marcus Miles to Nick Haitz. On the last play of the half, the Seahawks put greater distance between them and Yorktown by scoring a 34-yard touchdown to Nick Haitz for his second touchdown of the game, to take the lead 20-0 into halftime.

South Lakes defense took the hope out of the Yorktown Patriots by forcing multiple turnover on downs in the 3rd quarter. The Seahawks scored again on a 76-yard passing touchdown to Nick Hiatz for the hat trick to increase their lead to 26.

The final quarter was controlled by the Seahawks after Dylan White scored his second touchdown of the game on a 6-yard rush to add the cherry on top. With that score, it officially took Yorktown out of the game and improving South Lakes’ record to 1-1.

The Seahawks stifling defense dominated the Patriots forcing numerous punts and turnovers. South Lakes travels to Herndon on Friday the 12, to take on their rivals.