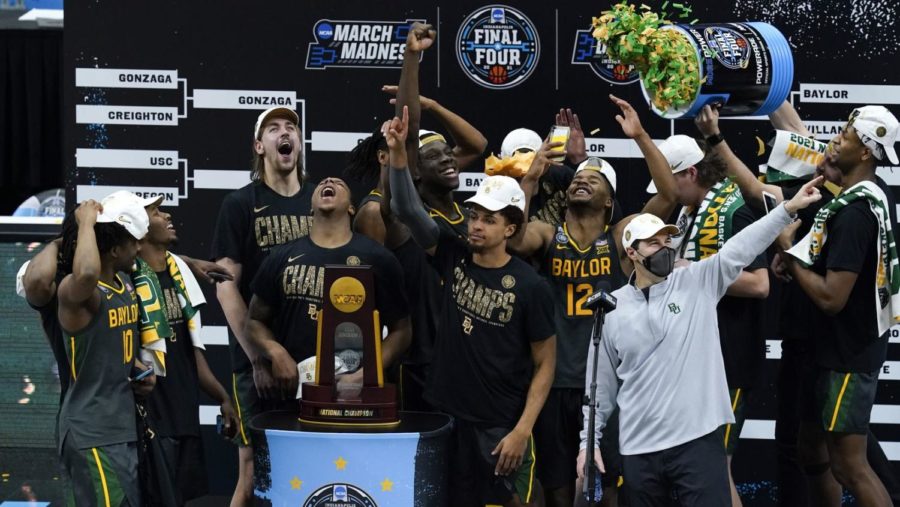 Image via the Dallas Morning News

Coming into the season, Baylor was ranked the second best team in the country only behind Gonzaga. Up until this championship game, Gonzaga held that top slot the whole season. Baylor, only losing two games, had a COVID pause in the middle of their season that brought the potential of this team out of the public eye. The Bears were still near the top of the rankings, but off people’s radar.

Going into the Tournament, Baylor was the familiar second best slot, only behind Gonzaga. Baylor for the first time ever was a one seed in the tournament. They started their tournament run off with an easy 79-55 win over the 16 seed Hartford Hawks followed by a 13 point win over the Wisconsin Badgers, which sent Baylor to the sweet 16. The second weekend was a little more uncomfortable, but Baylor took care of business beating the five seeded Villanova Wildcats and the three seeded Arkansas Razorbacks. That win over Arkansas sent Baylor to their third final four appearance, their first since 1950. With ease Baylor beat the second seeded Houston by a score of 78-59. Baylor was dancing to the championship.

Gonzaga’s final four game did not go as smoothly. Gonzaga’s matchup was against the 11 seeded UCLA Bruins. UCLA had ran through this tournament thus far completing upset after upset. It took everything Gonzaga had to beat UCLA in overtime; which included a half court buzzer beater. The stage was set: Baylor vs Gonzaga.

To begin the game Baylor’s man defense was stuffing Gonzaga’s Jalen Suggs and Drew Timme. At the half Baylor was on top 47-37 and were in control of the game. Things got tighter in the 2nd half as Gonzaga looked to steal the championship. The attempt fell short and Baylor knocked off Gonzaga. The big three, Butler, Mitchell and Teague, combined for 56 out of 86 total points and contributed with 11 rebounds and 12 assists.

For Baylor, it was a long time coming. Head coach Scott Drew, in his eighteenth season with the Bears achieved his goal of turning around Baylor basketball. After all the recruiting and player scandals that lead to scholarship losses in the early 2000s, all the losing seasons and the 2020 season (a potential championship year washed out by a pandemic), Baylor basketball rose above all to capture a long awaited championship — one they waited 71 years to get.