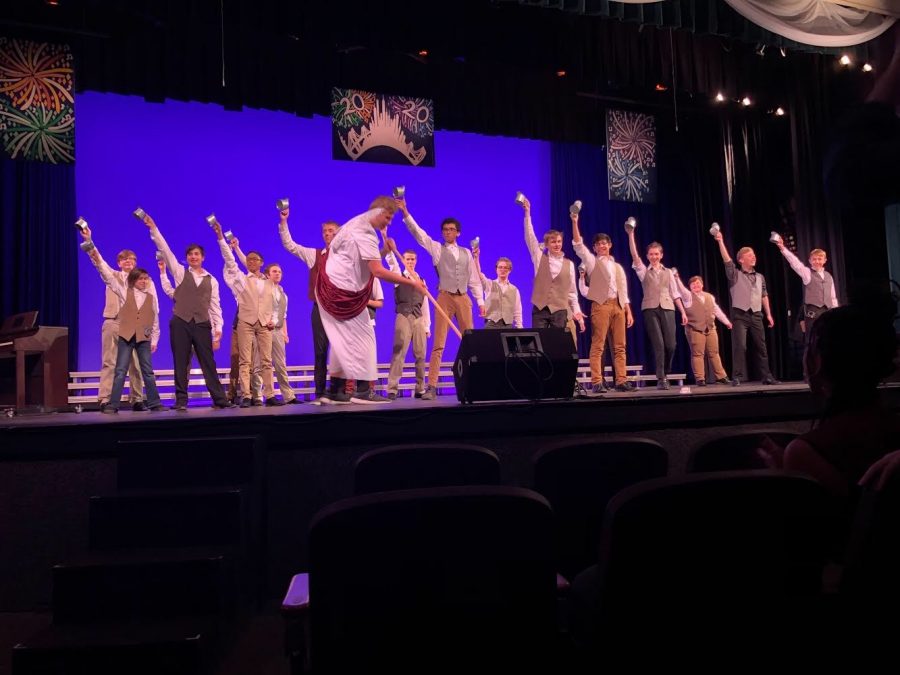 “Broadway night was a fun experience, and it was a really great way to meet new people,” Cochis exclaimed.

This year was senior Ryleigh Line’s first time participating in Broadway Night, but she was in the audience for the 2019 and 2018 productions. She sang as one of the three leads in the number “Poor Unfortunate Souls,” from Disney’s The Little Mermaid.

“My favorite part [of the show] was probably meeting new people from choir and being engaged in a community I don’t usually have the opportunity to interact with. Everyone was very supportive, and I made a lot of new friends,” Line explained.

“I would definitely recommend the experience. There are roles at all levels and anyone who wants to participate can in a multiplicity of ways,” Line added, to encourage South Lakes pyramid students who are interested in choir, theater, or being spontaneous and trying something new.

Senior Izzy Wyland has participated in three Broadway Night productions at South Lakes! She sang and danced in the number “Zero to Hero,” from Disney’s Hercules.

“I loved the Disney theme because there were so many fun, and known songs that can be enjoyed by everyone of all ages. It reminds most of us of our childhood and happiness, so it was really fun to portray and see on stage. In addition, the creative directors collaborated to come up with new, innovative versions of the songs to modernize or change the concept which made the numbers really interesting and a true experience to watch,” Wyland revealed.

Following the final performance, high school seniors gave tear-jerking speeches about how great the experience of being a part of Broadway Night was for them. It was definitely a night to remember.

“The Spirit of Disney” 2020 production of Broadway Night was a success, with a selection of magical numbers from various all-time Disney favorites. It gave a bunch of talented students the opportunity to showcase their voices, dancing ability, and overall excitement for musical theater. If the performers inspired you to take the mic, think about joining in on the fun next year in the annual tradition of Broadway Night!

Here are the highlights of the show and all our South Lakes performers:

“When You Wish Upon a Star” from Pinocchio, performed by Lauren Skinner.

“Just Around the Riverbend” from Pocahontas, performed by Camille Denny.

“Dig a Little Deeper” from The Princess and the Frog, performed by the Middle School Treble Cast.

“You’ll Be In My Heart” from Tarzan, performed by Danielle Yakubisin.

“How Far I’ll Go” from Moana and Hercules, performed by Alex Desai and Delia Hartman.

“Watch What Happens” from Newsies, performed by Margarita Gamarnik.

“Just Can’t Wait to be King” from The Lion King, performed by Hannah Carter, Mike Panatier and David Whomsley.

“Candle on the Water” from Pete’s Dragon, performed by Ryan van Hilst.

“When She Loved Me” from Toy Story 2, performed by Lindsey Hirshfeld. Dancers were Danielle Yakubisin and Karina Yakubisin.

“You Are the Music in Me” from High School Musical 2, performed by the full cast! The finale!