From the Board: ISIS 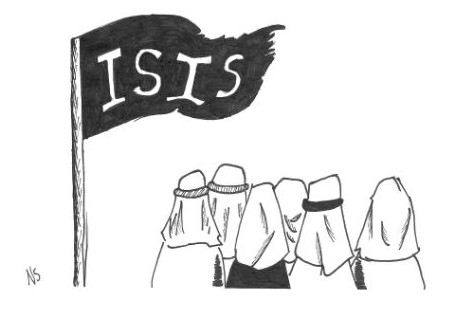 ISIS is an Islamic (Sunni) jihadist group that has rapidly become one of the most feared terrorist organizations in the world.

The terrorist group controls a large area of land stretching from Syria’s Mediterranean coast to south of Iraq’s capital, Baghdad. It brutally punishes citizens who do not comply with its extremist form of Sharia law by carrying out beheadings, crucifixions, and public floggings.

As 2014 came to an end, two American journalists were beheaded by ISIS members. A few weeks after this, a Jordanian pilot was set on fire and a video was released of the event. Most recently, a U.S. aid worker was killed after being held hostage for two years.

The violent acts of ISIS have recently been growing rapidly in number, terrifying the whole world.

Many people have been blaming Islam for these acts—the religion that ISIS represents and claims to follow. Opponents of Islam even use verses from the Quran to provide “evidence” that Islam supports terrorism. Those verses, however, are taken greatly out of context.

Understanding the Quran requires learned people to pass along the context. The holy book of Muslims was released at a time of war and conflict between the Muslims and the Byzantine and Sassanid empires. Therefore, some of the verses are not
applicable in present times the same way they were in the past.

ISIS fits certain verses of the Quran to their agendas, ignoring the context and meaning.

What some fail to see is that ISIS simply hides behind the Islamic faith to justify the
atrocious acts they commit.