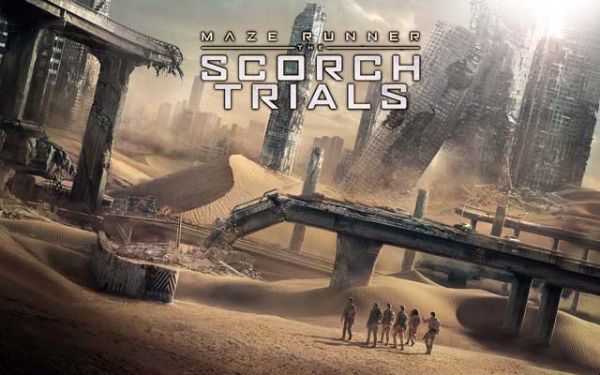 “The Maze Runner: Scorch Trials” continues the mysterious and action-packed adventure that follows Thomas (Dylan O’Brien) and his fellow Gladers as they journey through a new world in order to find the answers to their unfulfilled questions. Taking place shortly after the ending of the first film, “Maze Runner: The Scorch Trials” continues the similar tone and atmosphere of the first installment. It also reveals new information and characters that do a questionable job of carrying the rest of the story.

While the first film was a decent surprise from the considerably over-saturated young adult genre, “The Scorch Trials” struggles to translate its source material in a way that was as interesting as its predecessor.

In this chapter of the Maze Runner series, the action is intensified as the characters are further developed in a story line that unfortunately doesn’t quite keep up with the pace of the film itself. It starts off strong as the first and second acts continue to puzzle the audience with engaging mysteries and action-packed sequences. However, the mysteries and excitement that grow throughout most of the film begin to slowly fall apart in the third act as the mysteries are left unsatisfactory and the clichés become apparent.

On the other hand, there are a few notable improvements compared to the first, one of which being the action. The action is more fun and creative than we’ve previously seen as the characters are faced with new obstacles in a much larger environment, as opposed to the confines of the “Glade”. The characters are as likable as they were before, which isn’t necessarily saying much but it’s certainly not a substantial detractor. They are enough to keep the story moving along. The acting is decent, as it was in the first film, but the characters just don’t leave the audience satisfied as the film comes to a close.

Once again, it is believed that another installment in the Maze Runner series will be produced, but it is not certain that we necessarily want it.