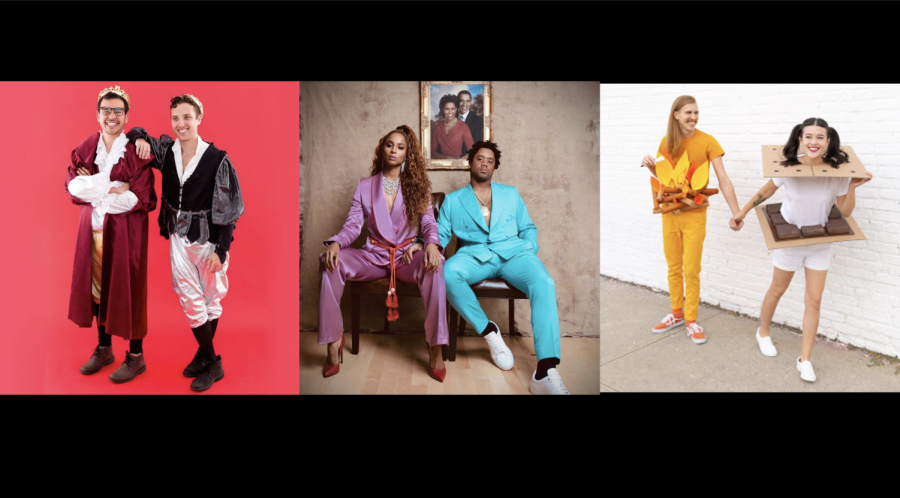 A simple, easy yet spooky costume idea, you and your significant other could dress up as matching skeletons for Halloween! Onesiebuy, PajamasBuy, Rave Wonderland, and LightInTheBox are just a few of the places where you could buy your onesies from. Since this costume only requires you and your significant other to wear onesies, an optional thing you could include in your costume could be skeleton makeup!

One of Cartoon Network’s most adorable couples, a vibrant costume idea for couples would be dressing up as Marceline and Princess Bubblegum! For Princess Bubblegum’s costume, you’ll need a long pink wig, a graphic black shirt, a pink skirt, and some blush. If you’re opting for an alternative option, you could buy a wig and dye it pink. To dress like Marceline, you’ll need a black wig, a grey tank top, and a pair of jeans. You can buy a gray tank top from Free People, Gap, or Forever 21. While you and your significant other may seem like polar opposites in this costume, remember, opposites attract!

Draco Malfoy and significant other

Due to his increasing popularity on TikTok and other social media platforms, a good couples costume idea is Draco Malfoy and his significant other! To dress like Draco, you’ll need to have blonde hair or an optional blonde wig, a Slytherin robe, a Slytherin tie, a white button-up shirt and black pants. Party City, AliExpress, Zulily, and Spirit Halloween are a few of the numerous places that sell Slytherin robes and Harry Potter accessories. As for Draco’s significant other, AliExpress sells Hogwarts house cosplay outfits with outfit necessities plus multiple accessories (house doesn’t matter). Once you and your significant other have everything you need, watch out for muggles or else Draco’s father will hear about it.

An adventurous costume idea for couples would be to dress up as a mermaid and pirate! For the mermaid costume, you’ll need to wave or curl your hair, wear a bandeau top (or bralette if you’re more comfortable), and wear a long iridescent skirt with a pattern resembling scales so people will know you’re a mermaid. Some stores that sell mermaid skirts are Spirit Halloween, Walmart, Hot Topic, HalloweenCostumes, or Poshmark while a few stores that sell bralettes/bandeau tops are American Eagle Outfitters, Hollister, ASOS, H & M, etc. As for the pirate costume, other than the needed attire all you’ll need is an optional eye patch, pirate hat, and fake sword. Party City, Spirit Halloween, Target, HalloweenCostumes, and Walmart are a few of the many stores that sell both male and female pirate costumes. On Halloween, you and your significant other can make your costumes even more fun by making up stories about how their beauty caused your ship to wreck and it was love at first sight.

If you’re a fan of Grey’s Anatomy, you and your significant other should dress up as Callie and Arizona! Because this is a fairly simple costume, all you and your significant other will need is two pairs of scrubs outfits and two ID cards (the ID cards are optional). An ideal place to buy scrubs for your costume would be Scrubs & Beyond while Etsy and eBay sell Grey’s Anatomy hospital ID badges.

Harry Potter and the golden snitch

Another Harry Potter related costume, a clever and cute couples costume idea would be dressing up as Harry Potter and the golden snitch! To dress like the Chosen One, himself, you’ll need messy hair, a scar on your forehead, a Gryffindor robe, a white button-up shirt, black pants and round-rimmed glasses. If you need help finding a Gryffindor robe or cosplay outfit, Party City, Target, AliExpress, Walmart, and Spirit Halloween. For Harry’s golden snitch, all you need is gold fairy wings, gold makeup, and a short to medium length gold/champagne dress. As for the gold wings, Party City and Etsy are ideal places to shop at while Lulu’s, Windsor, and Lucy in the Sky sell a multitude of gold/champagne dresses. When Halloween rolls around, you and your significant other’s costume is guaranteed to win 100 points for Gryffindor!

John B and Sarah Cameron

Inspired by one of the most popular shows of 2020, Outer Banks, an iconic and simple couples Halloween costume would be dressing up as John B and Sarah Cameron. When dressing up as John B, you’ll need messy hair, a button-up Hawaiian shirt and a pair of jeans. While most of these clothing items may already be in your closet, Hollister and Old Navy sell both Hawaiian t-shirts and jeans. To dress like the “Kook Princess,” you’ll need straightened hair, a tube top and jeans. Like John B’s outfit, tube tops and jeans can be found at Hollister, Old Navy, and American Eagle Outfitters. With these costumes, you and your significant other will be the life of the party, and don’t forget, your codenames are Vlad and Valerie.