Breaking down the “Drivers License” that had the world talking 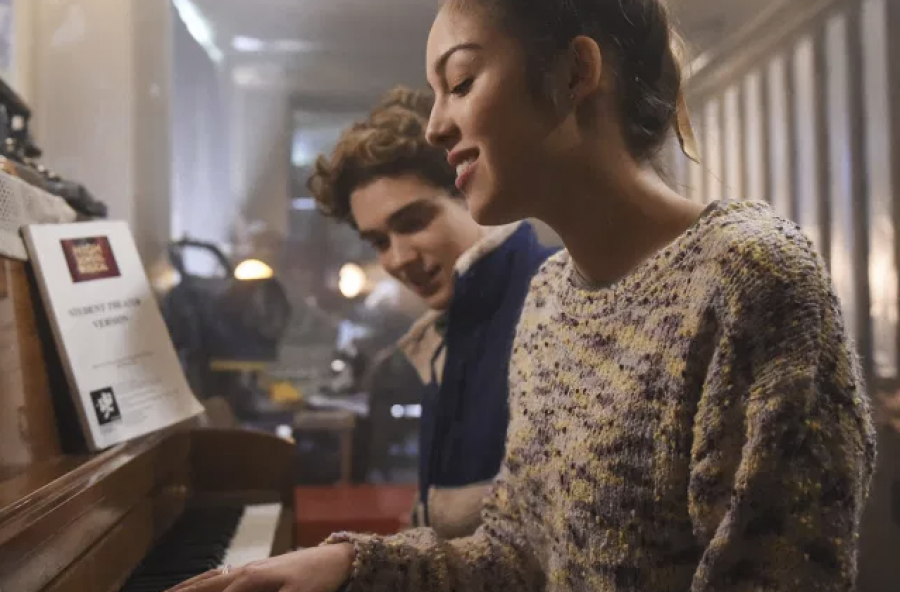 She got her driver’s license last week, but her heart broke a while ago.

Within not even a week after releasing her debut single, “Drivers License,” on January 8th, Olivia Rodrigo had already made history and caught major Hollywood attention. Rodrigo, now 18-years-old, started as an actress, most recently starring as Nini in Disney Plus spinoff, “High School Musical: the Musical: the Series” (HSMTMTS), part of the “High School Musical” Disney franchise.

The Hollywood attention from big names like Taylor Swift, Halsey, and Cardi B wasn’t what caught the public eye. Although fans thought Taylor Swift complimenting the young artist was mind blowing and Halsey having a cake with the single’s art on it delivered to Olivia was cool, the name Joshua Bassett had more heads turning. Bassett, age 20, is Olivia’s co-star in HSMTMTS, playing her character Nini’s love interest, Ricky. The series takes place at East High School school, where the original movies were filmed in Salt Lake City, Utah. The school puts on the popularized play version of the movie, but with high school theatre comes drama between cast members. Olivia and Joshua, or Nini and Ricky, are a fan favorite couple for the series. Past the on camera relationship Ricky and Nini have, fans quickly noticed that Joshua and Olivia were close off camera as well. This sparked dating rumors that neither of them have formally addressed. The internet didn’t need the pair to confirm to assume they were dating in real life. By putting pieces of interviews and songs either of them have written and posted to social media, fans put two and two together and learned that Joshua had taught Olivia how to drive.

In July of 2020, Olivia posted a part of the song she had written to Instagram with the caption, “wrote dis the other day. vv close to my heart. gonna call it drivers license I think lol.” In the song she sings about the boy who taught her how to drive, they broke up and now she has her license, but not the boy she loves. She started the song with, “ I got my driver’s license last week. Just like we always talked about. ‘Cause you were so excited for me. To finally drive up to your house. But today I drove through the suburbs. Crying ’cause you weren’t around.” She ended the snippet singing, “And I don’t believe you went you say I did nothing wrong,” a lyric that didn’t make it to the final version. Flash forward to Halloween, and the name Sabrina Carpenter is brought into the picture. Fans had been speculating if the never actually confirmed couple had broken up, and on Halloween Josh and fellow Disney actress, and singer, Sabrina Carpenter were seen together as Sharkboy and Lavagirl, basically confirming Josh and Olivia’s split.

Olivia posted a couple other teasers leading up to the release on January eighth, but when the clock struck midnight, fans were quick to notice a subtle, but iconic, lyric change. The original second verse Olivia shared was, “You’re probably with that brunette girl…” a lyric that looking back sounded forced, like “brunette” didn’t quite fit. She changed “brunette” to “blonde” for the final release, and fans called major shade towards Sabrina, who is blonde. Fans took notice that Olivia never said anything bad towards the “mystery blonde,” as the lines following are, “Who always made me doubt. She’s so much older than me. She’s everything I’m insecure about,” envying the blonde. Then Josh announced his new song, “Lie Lie Lie” would be released on January 26, but was otherwise irrelevant, finding that he wrote the song before him and Olivia were together.

Although Olivia did nothing but bring Sabrina up, Sabrina didn’t interpret the lyrics that way. On January 21, 13 days after Driver License’s release, Sabrina posted a five second snippet of a new song, out of nowhere, with just her singing the lyrics, “Maybe we could’ve been friends.” The song was obviously directed towards Olivia. She revealed the song, titled “Skin,” would be out at midnight. Quickly after the release, Olivia fans took into account that not even 15 seconds in, the first verse was focused on Olivia. Most mentionably, the now infamous line, “Maybe blonde was the only rhyme.” Other than the flaw that Olivia didn’t technically rhyme blonde with anything, this sealed the deal for fans. And if that line wasn’t enough, the chorus being “you can try to get under my skin, while he’s on mine” secured the alleged intent in fan’s minds. Sabrina started getting bashed online (even more than before) for “attacking” Olivia. Many commented that Olivia was just a 17-year-old who just had her heart broken.

After weeks of online hatred, Sabrina did interviews promoting the song, and in an interview with James Corden, host of “The Late Late Show”, she attempted to set the record straight by saying, “I think this was like a really interesting song for people to kind of misinterpret and make into something that it wasn’t really supposed to be in the first place,” which pretty much no one believed. On a more candid, and longer  interview on the “Zach Sang Show” she made her message a little more clear by reiterating, “I’m just approaching it from you know, again, the attention that people kind of directed towards me, assuming that it was me. That I was just like ‘Well, you know, it does make sense, I am blonde…‘Skin’ — I can’t stress this enough — is not about one person. I’ve had so many different experiences in the last year in my personal life and in my career where there was a lot happening and I couldn’t do anything about it and I couldn’t say anything ’cause it seemed like either way people were mad at me.”

Whether it was her statements clearing the air or just losing relevance over time, the hate towards Sabrina has seemed to slow down. Many following this “love triangle” on the internet have predicted this was all one big publicity stunt, but it seems like those accusations have been put to rest. Olivia and Josh are currently shooting season two of “High School Musical: the Musical: the Series” together, which will be released sometime this year.