The “Spirit of Reston” adapts — Marching Band during COVID 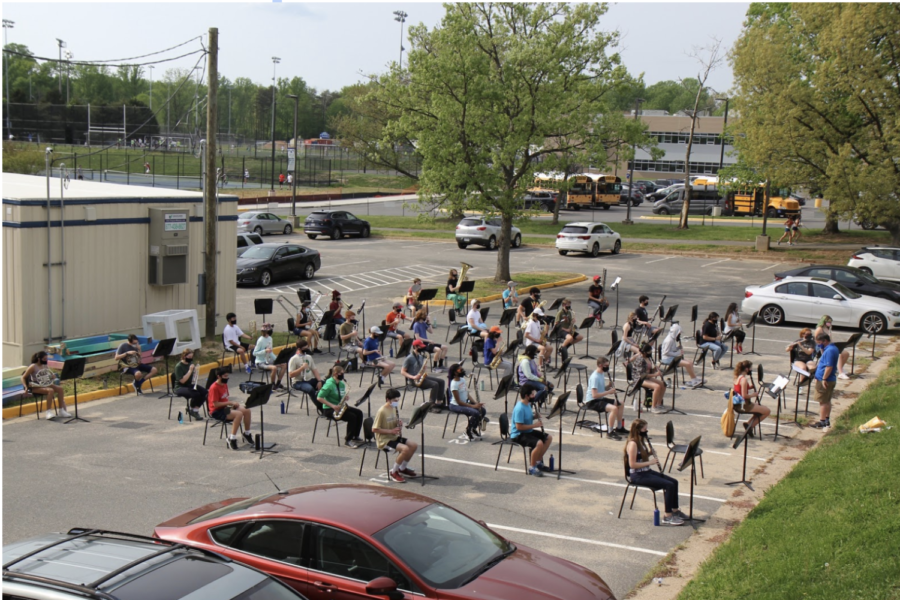 Band has been a thriving entity at South Lakes for as long as many students, staff members and alumni can remember. With marching being so hands on and group based, COVID has been a harsh enemy. Weather intrusions while practicing outside, instrument covers, social distancing, spilt rehearsals and staggered arrivals times have been the unfortunate but entirely necessary forces keeping our students safe.

Senior Eric Horne shared his feelings about playing with the restrictions, saying that band has been “probably less fun, but still enjoyable.” There was a more uplifting take from freshman Beck Baker, “I really love band this year! I’ve enjoyed meeting new people and learning new things. Mr. Fore is a great teacher, and he directs a great band!”

With sports starting in December, band’s starting in March felt unfair to some. “A huge disruption being the late start time for band activities,” Mr Fore, the band director explained.

“I wish we would’ve had more concerts, and could’ve played as a whole band all year instead of just the last couple months,” freshman Finn Wilkins shared insight into his experiences this year,  “one of the best parts is playing in the concerts and as a group and we couldn’t do that.” This might make you presume that students are less passionate and driven this year, but Mr. Fore pointed to students like Alex Gifford who still finished first chair in All-State Band on the trumpet.

The skies look even brighter ahead, an event is being planned on May twentieth for members of the band and a couple of their family members. South Lakes is ready and looking forward to the great things to come out of the band program in coming years!