North Korea is known as the Hermit kingdom, infamous for its nuclear weapons program, and totalitarian regime. North Korea has come under fire for countless human rights violations including arbitrary arrests, lack of food, water, and sanitation. Violence against women, no freedom of movement, torture, forced dissapearnces, and life threating prison conditions are no strangers to the country. North Korea is regarded as the most isolated country in the world. Not much is known about what goes on in this isolated kingdom, but as North Koreans continue to defect from their oppressive home land and reflect on their lives and harrowing escapes they give us a glance into the real North Korea. Here are seven remarkable stories of North Koreans making their escape. 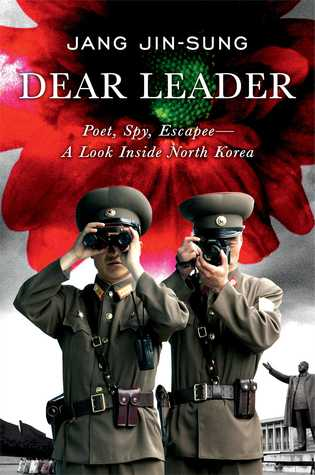 Book Blurb: “In this rare insider’s view into contemporary North Korea, a high-ranking counterintelligence agent describes his life as a former poet laureate to Kim Jong-il and his breathtaking escape to freedom.

“The General will now enter the room.”

Everyone turns to stone. Not moving my head, I direct my eyes to a point halfway up the archway where Kim Jong-il’s face will soon appear.

As North Korea’s State Poet Laureate, Jang Jin-sung led a charmed life. With food provisions (even as the country suffered through its great famine), a travel pass, access to strictly censored information, and audiences with Kim Jong-il himself, his life in Pyongyang seemed safe and secure. But this privileged existence was about to be shattered. When a strictly forbidden magazine he lent to a friend goes missing, Jang Jin-sung must flee for his life.

Never before has a member of the elite described the inner workings of this totalitarian state and its propaganda machine. An astonishing expose told through the heart-stopping story of Jang Jin-sung’s escape to South Korea, Dear Leader is a rare and unprecedented insight into the world’s most secretive and repressive regime.”

This book was astonishing. Jang Jin-Sung gave a very eye opening account of what really goes on in Pyongyang. Every time I flipped the page I was shocked at what I learned. I will say that this book is not for the faint of heart; it is very heartbreaking, and filled with many emotions of loss, regret, and longing.

Escape From Camp 14 by Blaine Harden:

Book Blurb: “North Korea is isolated and hungry, bankrupt and belligerent. It is also armed with nuclear weapons. Between 150,000 and 200,000 people are being held in its political prison camps, which have existed twice as long as Stalin’s Soviet gulags and twelve times as long as the Nazi concentration camps. Very few born and raised in these camps have escaped. But Shin Donghyuk did.

In Escape from Camp 14, acclaimed journalist Blaine Harden tells the story of Shin Dong-hyuk and through the lens of Shin’s life unlocks the secrets of the world’s most repressive totalitarian state. Shin knew nothing of civilized existence-he saw his mother as a competitor for food, guards raised him to be a snitch, and he witnessed the execution of his own family. Through Harden’s harrowing narrative of Shin’s life and remarkable escape, he offers an unequaled inside account of one of the world’s darkest nations and a riveting tale of endurance, courage, and survival.”

Dong-hyuk’s story is very devastating, his story of struggling to survive in the brutal conditions of camp 14. Dong-hyuk lets the reader in on his life in Camp 14 where he was skeptical of everyone around him who could be an informer or food competitor. You will be rooting for Dong-hyuk’s journey to freedom from beginning to end.

The Girl with Seven Names by Hyeonseo Lee: 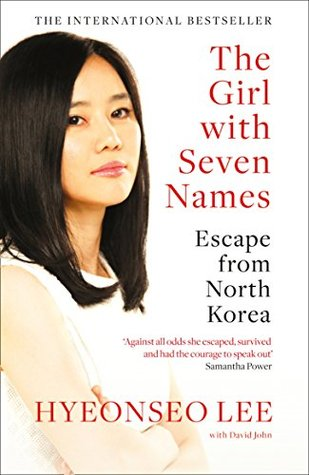 Book Blurb: “As a child growing up in North Korea, Hyeonseo Lee was one of millions trapped by a secretive and brutal totalitarian regime. Her home on the border with China gave her some exposure to the world beyond the confines of the Hermit Kingdom and, as the famine of the 1990s struck, she began to wonder, question and to realise that she had been brainwashed her entire life. Given the repression, poverty and starvation she witnessed, surely her country could not be, as she had been told, “the best on the planet”?

Aged seventeen, she decided to escape North Korea. She could not have imagined that it would be twelve years before she was reunited with her family.

She could not return, since rumours of her escape were spreading, and she and her family could incur the punishments of the government authorities – involving imprisonment, torture, and possible public execution. Hyeonseo instead remained in China and rapidly learned Chinese in an effort to adapt and survive. Twelve years and two lifetimes later, she would return to the North Korean border in a daring mission to spirit her mother and brother to South Korea, on one of the most arduous, costly and dangerous journeys imaginable.

This is the unique story not only of Hyeonseo’s escape from the darkness into the light, but also of her coming of age, education and the resolve she found to rebuild her life – not once, but twice – first in China, then in South Korea. Strong, brave and eloquent, this memoir is a triumph of her remarkable spirit.”

The Girl with Seven Names gives a look at how important having family across the border is, from sending money to hiding defector family members and risking their own lives. Hyeonseo Lee struggles to find herself in China and then South Korea to finally be who she is. Hyeonseo’s story is very inspirational, and lets you in on the struggles of hiding out in China.

Every Falling Star by Sungju Lee: 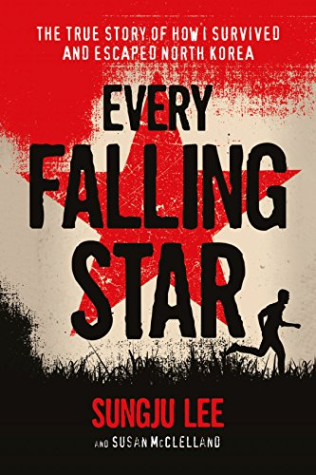 Book Blurb: “Every Falling Star, the first book to portray contemporary North Korea to a young audience, is the intense memoir of a North Korean boy named Sungju who is forced at age twelve to live on the streets and fend for himself. To survive, Sungju creates a gang and lives by thieving, fighting, begging, and stealing rides on cargo trains. Sungju richly re-creates his scabrous story, depicting what it was like for a boy alone to create a new family with his gang, his “brothers”; to be hungry and to fear arrest, imprisonment, and even execution. This riveting memoir allows young readers to learn about other cultures where freedoms they take for granted do not exist.”

Every Falling Star tells the story of the orphaned generation left behind in North Korea who are struggling on the streets. Sungju Lee recounts his life on the street from searching for food to joining a gang. Many defectors recount looking at these kids known as ‘Kotchebi’ with pity. Sungju recounts his life growing up as a ‘kotchebi’ trying to live just another day.

In Order to Live by Yeonmi Park: 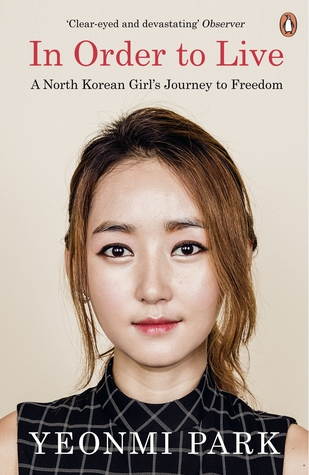 Book Blurb: “Human rights activist Park, who fled North Korea with her mother in 2007 at age 13 and eventually made it to South Korea two years later after a harrowing ordeal, recognized that in order to be “completely free,” she had to confront the truth of her past. It is an ugly, shameful story of being sold with her mother into slave marriages by Chinese brokers, and although she at first tried to hide the painful details when blending into South Korean society, she realized how her survival story could inspire others. Moreover, her sister had also escaped earlier and had vanished into China for years, prompting the author to go public with her story in the hope of finding her sister.”

Yeonmi Park gives the readers an in deep understanding of the human trafficking that happens in China. The abuse that North Korean women have to deal with in China is atrocious. Yeonmi’s resilience is evident throughout the book, and her remarkable story is not one to forget.

Nothing to Envy Ordinary Lives in North Korea by Barbra Demick 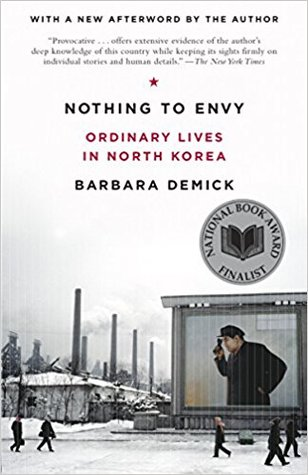 Book Blurb: “Nothing to Envy follows the lives of six North Koreans over fifteen years—a chaotic period that saw the death of Kim Il-sung, the unchallenged rise to power of his son Kim Jong-il, and the devastation of a far-ranging famine that killed one-fifth of the population.

Taking us into a landscape most of us have never before seen, award-winning journalist Barbara Demick brings to life what it means to be living under the most repressive totalitarian regime today—an Orwellian world that is by choice not connected to the Internet, in which radio and television dials are welded to the one government station, and where displays of affection are punished; a police state where informants are rewarded and where an offhand remark can send a person to the gulag for life.

Demick takes us deep inside the country, beyond the reach of government censors. Through meticulous and sensitive reporting, we see her six subjects—average North Korean citizens—fall in love, raise families, nurture ambitions, and struggle for survival. One by one, we experience the moments when they realize that their government has betrayed them.

Nothing to Envy is a groundbreaking addition to the literature of totalitarianism and an eye-opening look at a closed world that is of increasing global importance.”

In Order to Envy is a great book to learn about ordinary lives of North Koreans. This book tells the story of multiple defectors who escaped North Korea, and have begun new lives in South Korea.

The Great Leader and the Fighter Pilot by Blaine Harden 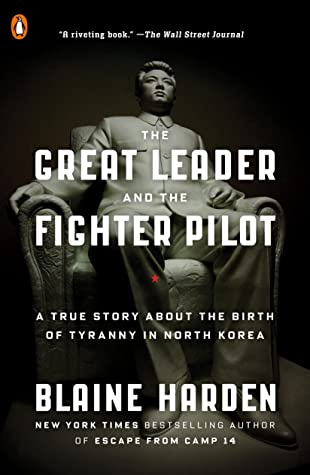 Book Blurb: “In The Great Leader and the Fighter Pilot, New York Times bestselling author Blaine Harden tells the riveting story of how Kim Il Sung grabbed power and plunged his country into war against the United States while the youngest fighter pilot in his air force was playing a high-risk game of deception—and escape.

As Kim ascended from Soviet puppet to godlike ruler, No Kum Sok noisily pretended to love his Great Leader. That is, until he swiped a Soviet MiG-15 and delivered it to the Americans, not knowing they were offering a $100,000 bounty for the warplane (the equivalent of nearly one million dollars today). The theft—just weeks after the Korean War ended in July 1953—electrified the world and incited Kim’s bloody vengeance.

During the Korean War the United States brutally carpet bombed the North, killing hundreds of thousands of civilians and giving the Kim dynasty, as Harden reveals, the fact-based narrative it would use to this day to sell paranoia and hatred of Americans.

Drawing on documents from Chinese and Russian archives about the role of Mao and Stalin in Kim’s shadowy rise, as well as from never-before-released U.S. intelligence and interrogation files, Harden gives us a heart-pounding escape adventure and an entirely new way to understand the world’s longest-lasting totalitarian state.”

The Great Leader and the Fighter Pilot is one of my favorite books on North Korea. It gives a completely new and historical perspective of North Korea. No Kum Sok’s story of joining the North Korean air force and then eventually flying his way to freedom is fascinating and astonishing. I highly recommend this book for history fans.

All of these books tell the stories of real people who were brave enough to escape, and find freedom outside of North Korea. Millions of North Koreans remain trapped , and although it seems impossible to help organizations like Liberty in North Korea are working to help North Koreans escape. Reading defector stories like these help raise awareness about the atrocities that happen inside the hermit kingdom of North Korea.