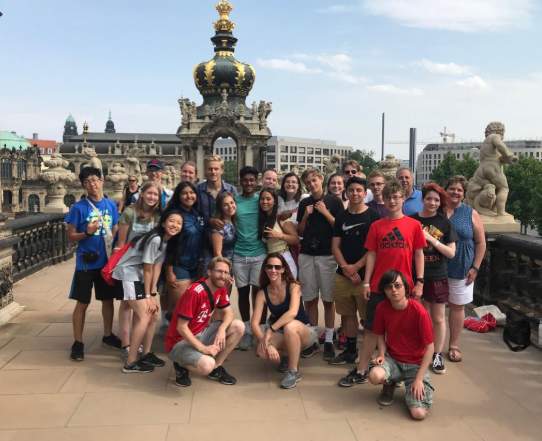 Over the summer of 2019, the South Lakes German department sent a group of students abroad to experience everyday life and culture in Germany. They spent time with their host students in school, at home, and in their free time. This fall, the once host families became the tourists ,joining South Lakes students in the United States. I spoke with the German exchange students from Brunswick, Germany and their hosts from South Lakes to discuss their initial impressions of the U.S. and how it compares to Germany.

I discussed home life with South Lakes senior Isabella Dunkle and the exchange student she’s hosting, Malene Puschel. When I asked Malene about the main differences she has seen so far in the U.S. she immediately pointed to the architecture. Isabella and Malene explained that in Germany the buildings and homes are much more efficient. Designs are modern, walls are built with cement insulation, and buildings are designed with the intention of being as simple and environmentally conscious as possible. They laughed when explaining that there’s no air conditioning in homes or schools, meaning on days when it reaches upwards of 102 degrees younger students have to take “heat days.” Unfortunately, as an upperclassmen Malene said she does not get any heat days. Malene explained that her school is very different from South Lakes in the way that there’s a total population of about 900 students, and it holds students ranging from the fifth grade to their 13th grade. Malene commented on how in Brunswick, students tend to discuss and speak up in class more, since that is part of their grade. She said that it’s interesting how students move from classroom to classroom, and Isabella explained that their school functions the way many U.S. elementary schools do. Students stay with one class in one classroom, and sometimes different teachers will swap out. Despite all of these differences, Malene expressed her excitement to be in the U.S. and to see New York for the first time. Isabella explained that now that they know each other from their time together over the summer in Germany, all of the students are friends and can skip right over any awkward stages that hindered their time together at the beginning of the American students’ trip to Germany.

German exchange student Jana Olschack and her host junior Jasmine Reed discussed how exciting this opportunity is for them. They explained that it can be difficult for families to host exchange students in the U.S. due to strict and complicated restrictions. Jasmine explained that the looser laws regarding exchange students in Germany made her time there even more immersive and enjoyable. They discussed the security coming into the US, how difficult is is to bring in programs, and even the fingerprinting process. She also pointed to the cameras and police presence at the school, explaining that windows and campuses remain open in Brunswick. Jana laughed, suggesting that she thinks it may even be illegal to have such security in Germany. They looked forward to spending more time together, the way they did in Brunswick.

I spoke with South Lakes junior Mika Ernst and the exchange student he is hosting, David Schubert, about school life. School is very different in the smaller town of Brunswick, which has a population of 250,000 people (for reference, Fairfax County’s population is 1.148 million as of 2017). David explained that their school in Brunswick dates back about 600 years (the school itself, not the building). “[We] are very proud of [our] traditions,” he noted. He explained that most classrooms don’t use PowerPoint in Germany, but instead opt for older overhead projectors with transparencies. Mika, David’s host, discussed his time in Germany, explaining that “they have a lot more freedom and free time there.”  David agreed with this, also commenting on the lack of windows in the school building, with a laugh. This said, aside from the way people dress and the style of the classrooms they fill, Mika and David agreed that at the root of it all, the people, which are the most important part, are not so different.