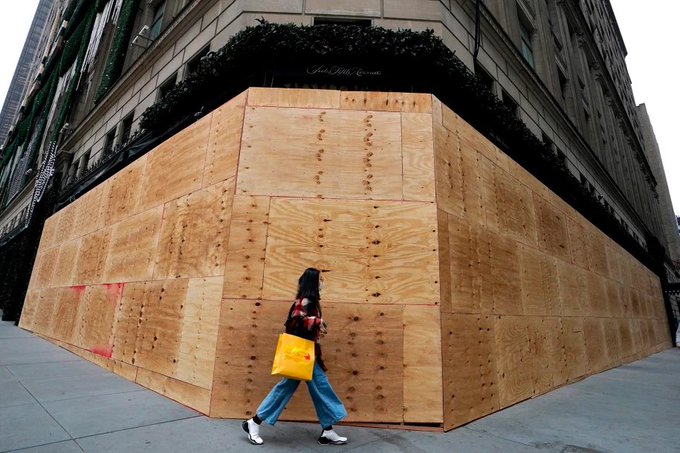 Image via The Yeshiva World

Storefronts, office buildings and even the White House have all boarded up across Washington DC in anticipation for the election on November 3, 220.

While DC is strongly blue — Biden leads by 85 points — tensions have been high in the District after a spring and summer filled with protesting and years of inflammatory remarks about the city from President Trump. Protests are likely to occur regardless of whoever leaves election night leading. Because of voting legal battles, the results of the election may not be known until long after election night. President Trump says he will claim victory if he is ahead during early exit results, which could intensify unsettled protestors.

“It is widely believed that there will be civil unrest after the November election regardless of who wins,” said D.C. Police Chief Peter Newsham DC police stocked up on riot control gear (read about DC’s new police regulations here) and limited the number of officers off-duty.

George Washington University students were told to prepare for the weekend as one would ready their supplies and self as “you would for a hurricane or a snowstorm.”

The weekend leading up to the election has been filled with confrontation and large demonstrations from Trump supporters, blocking highways and leading to an FBI investigation of a caravan that reportedly threatened the Biden campaign’s bus.

While people around the country voice concerns about unrest, DC will be in the heart of the election action. The highly political energy in the Washington DC area will likely be highlighted during a time of national division.